The fall semester for public schools begins in early August, and the 34th Legislative Committee on Education and Workforce Development has convened a hearing to consider school readiness. Witnesses appearing on-site and virtually, on-screen, shared assessments and reports based on their own inspections and findings.

Representatives from the Board of Education, the Department of Health and the fire department appeared before the committee, chaired by St. Croix Senator Genevieve Whitaker. But no one from the main body the committee was looking for – the Ministry of Education – came.

Committee Member and Senate Chair Donna Frett-Gregory said she was frustrated with the many times key witnesses did not appear on the issue of school readiness. The main one of his frustrations is the maintenance of the school or lack thereof.

Witnesses who appeared, however, shared updates on their efforts to prepare schools to open for the start of the fall semester. 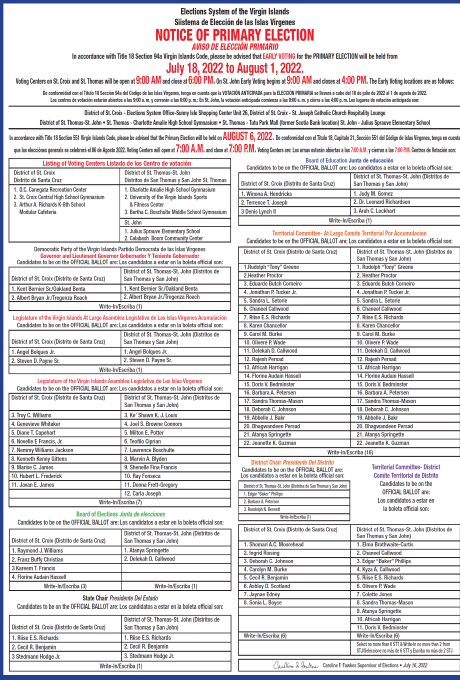 School Board Chairman Kyza Callwood spoke for nearly an hour about the visits he and other board members have made to schools in St. Thomas-St. John and St. Croix neighborhoods. Many details provided included building maintenance and repairs, fire safety, staffing and vacancies, and whether the number of students in a classroom is expected to drop due to a total number of lower registrations.

Deputy Health Commissioner Nicole Craigwell-Syms briefed members of the Education Committee on the inspections being carried out by the Department’s Environmental Health Division. Syms said inspectors were focusing on health and safety conditions in public school kitchens.

And Assistant Fire Services Director Antonio Stevens gave a progress report on fire safety preparedness. St. Thomas District Sen. Carla Joseph expressed concern about the number of schools for which firefighters did not have safety reports, but Stevens said inspections were still ongoing.

There also appears to be some confusion regarding the number of fire safety inspection reports received by the School Board.

Whitaker asked if an inspection had been done for Ivanna Eudora Kean High School.

The lawmakers also said that while the school board, environmental health and fire departments shared their assessments of school readiness, two other agencies did not. The Ministries of Public Works and Planning and Natural Resources—like Education—did not participate in the hearing or hand over the inspection reports.

Committee member and Senator Milton Potter asked Callwood what detail of the school board report stood out to him. “School safety and security was the domain,” the president said.

Like other senators at Friday’s hearing, Potter expressed disappointment with the Department of Education. “If I rated the Ministry of Education on our schools…the rating would not be good. It would be a ‘D’ at best, and that’s something that should concern all of us,” he said.

But the school board’s executive director suggested signs of improvement were beginning to appear. “Safety and security has always been a concern for us at the Board of Education,” Principal Stephanie Berry said, adding that she was pleased to see the department begin to take safety in public schools seriously.

Senator Janelle Sarauw asked school board witnesses if there had been any changes to the school grading system. She also asked what board officials learned about helping students who have fallen behind in their studies in recent years.

Pierlucci says he denies any impropriety in government agencies